When an individual is arrested for a crime in the State of California, typically that person will be taken to a local law enforcement station for booking, prior to incarceration in a station lock-up or county jail. Once arrested and booked, the defendant has several options for release pending the conclusion of his or her case. Bail is designed to guarantee the appearance of a defendant in court at the time directed by the judge.

What are the release options if someone is arrested?

For this service, the defendant is charged a premium (typically 10% of the bail amount in California). For example, if the bail amount is $10,000.00, the premium charged is $1,000.00. Prior to the posting of the surety bail bond, the defendant, friend or relative must contact a licensed bail bond agent. You can contact us toll-free at 1-866-910-BAIL (2245). Once a bail bond agent is contacted, an interview or appointment will be scheduled immediately.

By involving the family and friends of a defendant, as well as through the acceptance of collateral, the bail bond agent can be reasonably assured that the defendant released on a surety bail bond will appear at all of his/her court appearances.

After this procedure is completed, the bail bond agent will post a bond for the full bail amount, financially guaranteeing the defendant’s return to court as scheduled.

Another method of release pending trial is through a pre-trial release program administered by the county or a law enforcement agency. Usually, the employees of these programs interview defendants in custody and make recommendations to the court regarding the release of individuals on their personal recognizance (i.e., without any financial security to ensure the defendant’s return).

The interview process is often conducted over the telephone, usually with little inquiry into the defendant’s background. The interview process attempts to determine whether the detainee is likely to appear in court. There is usually no verification of information provided by the defendant. Since no bail money, property, or bail bond is posted to secure the defendant’s appearance in court, he/she faces no personal economic hardship from the conscious decision not to appear in court.

How much does a surety bail bond cost?

How much of the premium will I get back?

Typically the 10 percent premium is fully earned once the bail bond is posted with a jail or court. That is how bail bond agents and their surety bail bond companies make their money and pay their bills.

Collateral is anything of value used to financially secure a bail bond.

What can be used as collateral?

Some examples of collateral include signature, credit cards, houses, cars, boats, jewelry, or electronic equipment (you get the idea).

When will collateral be returned?

Collateral is usually returned when the court has finished with the defendant’s case(s), exonerating the bail bond(s), and when all bail bond fees have been paid.

How long does it take to be released from jail?

There are two types of jails: city jails and county jails. City jails are operated by city police departments and county jails are operated by the county sheriff. After a defendant is booked into a city jail (i.e., fingerprinted, photographed, warrants checked, etc.), it typically takes anywhere from 15 minutes to 1 hour to be released on bail. After a defendant is booked into a county jail, it usually takes anywhere from 2 to 6 hours to be released on bail. We wish we could speed up the process but the city and county jails operate at their own pace. Eight Ball Bail Bonds does everything possible to expedite the defendant’s release. Let us assure you we will be by your side every step of the way. 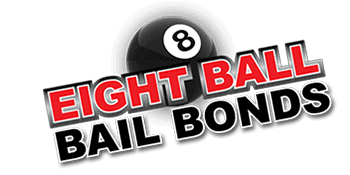 Bail is designed to guarantee the appearance of a defendant in court at the time directed by the judge. When an individual is arrested for a crime, typically that person will be taken to a local law enforcement station for booking, prior to incarceration in a station lock-up or county jail. Once arrested and booked, the defendant has several options for release pending the conclusion of his or her case.